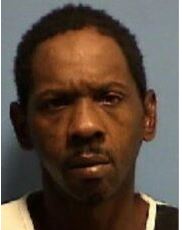 Buckley is accused of raping a woman during a home invasion in Covington on July 20, 2020.